There were several worrying signs in the UK economy over the past month, as growth stuttered, inflation increased and markets suffered. But the blip given to the sense of stronger leadership by the Prime Minister’s positive performance at the Conservative Party conference acted as a counter-weight, aided by some better mood music coming out of Brussels on the likelihood of a Brexit deal.

Overall, the UK suffered a small drop in September, with the Brexometer showing a reading of 5.25. This is a fall of four basis points from the August score of 5.29. The October score of the Accountagility Index (AAX) is still ahead of the pre-Brexit benchmark of 5.18, but a way behind the record high of 5.43 seen in July. The Index records UK political and economic health in a score out of ten, and any score above 5.00 is positive

The most substantial contributor to the fall was the sharp drop in the UK market indices, with both the FTSE 100 and 250 at their lowest levels since April. Then there was an increase in inflation, spurred by oil price rises as well as the weakness of the pound. UK growth was also a little lower at 1.22%, whilst sentiment in the Services and Construction sector fell off slightly.

Is it all gloom and doom for the UK then?

If the underlying details are sifted and explored, a very mixed and contradictory picture emerges, as has been the case ever since the Brexit referendum. For example, there are some rather surprisingly positive shards of light in business sentiment. Job creation was up in the important Services sector, new business volumes in construction are rising as the fastest rate since late 2016, with a higher number of apprentices and trainees observed, and Manufacturing exports recovered, led by orders from the US and Europe.
And then there are upbeat reports of a breakthrough in the Brexit talks, although the details of the deal remain shrouded in mystery, and the crucial Irish border conundrum is yet to be solved.
Lastly there was an encouraging further rise in inward investment, which has been increasing solidly for the past 20 months.

What does all this tell us? 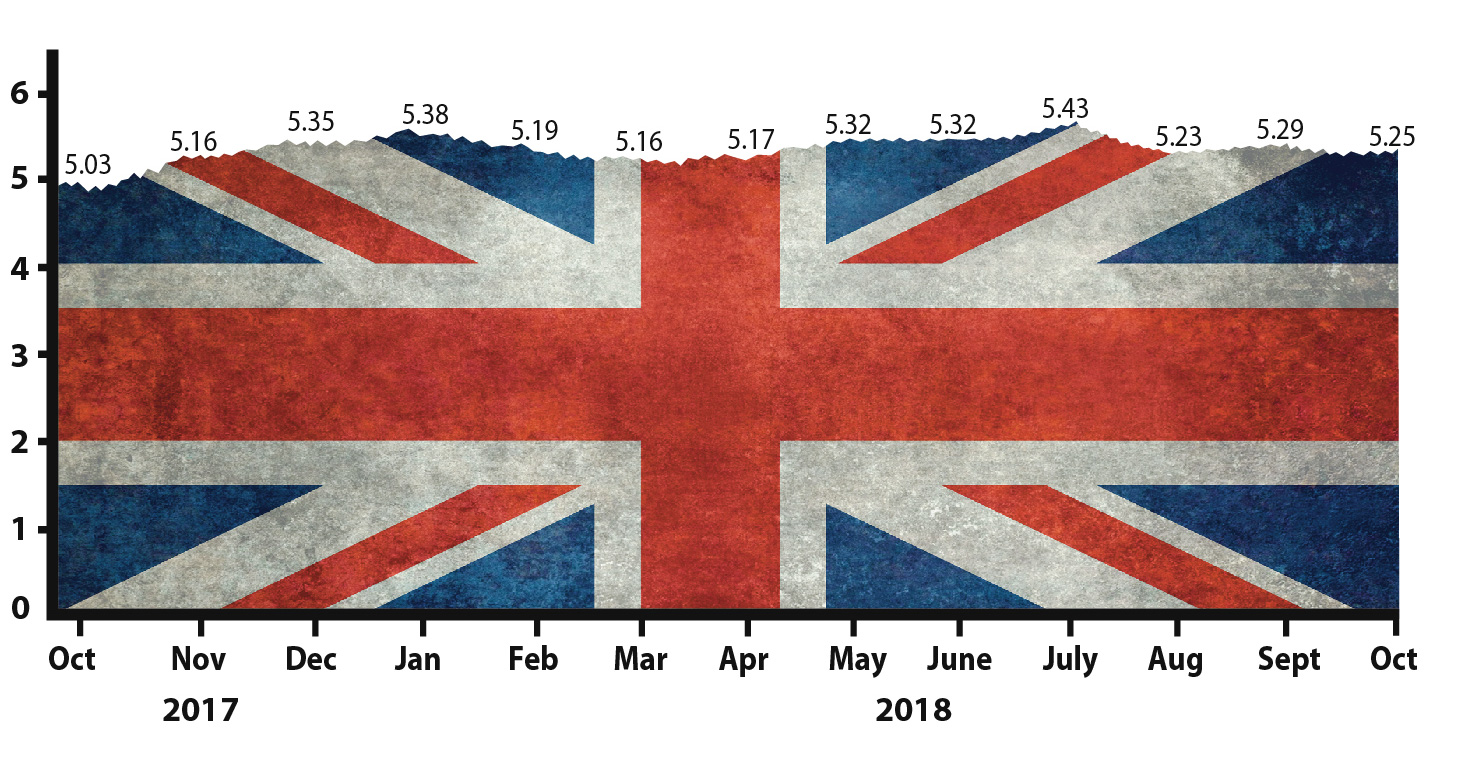 The Brexometer is a dispassionate measure of a passionate time. Looking at the distinct factors figuratively, however, reveals an image of the UK as a sailing ship, whose passage in good winds is being held back by the drag anchor as signified by the uncertainty of the Brexit deal. In other words, once the deal is done, the underlying resilience and strength of the UK economy could propel HMS Britain forward powerfully.

Over the next month, the Brexit negotiations may reach some kind of conclusion, with a EU conference later in November being held ready to approve it from the European end. After that, could the deal, whatever it is, get through the Houses of Parliament? As the ship continues to make heavy weather, how will the Index react? Can it hold up during a choppy month, or will it all continue to drop?