Beware Friday the thirteenth! Index gets jumpy ahead of a date with destiny

Good economic news pushes Brexometer to the best of the bad

We had the fearsome prospect of a Halloween Brexit, but now we have something just as spooky. The result of the UK General Election will be known on Friday 13th December, following the polling date of Thursday 12th. You couldn’t make it up. And it will almost certainly be scary for millions of Britons, given the polarisation of UK politics. This date won’t be going away either. Be scared, be very scared.

The mood is spreading. Even the Brexometer got jumpy this month, with the Accountagility Index (AAX) rising 23 basis points to 4.99, from 4.76 last time. The Index records UK political and economic health in a score out of ten. Any score below 5.00 is negative, so we remain in the red rather than in the black this month, but by the slenderest of margins.

In the next few days, I’ll be posting a Video Blog that will lay out the context of the Brexometer, and an insight to what the immediate future might hold – watch this space. 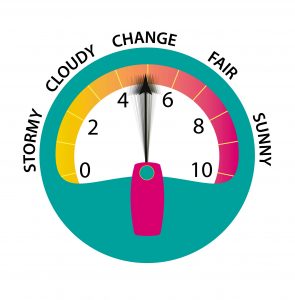 In the meantime, what caused the Index to go up this month?

There were two highly positive factors at play since last time. 1) the speedy conclusion of the Brexit negotiations between Boris Johnson’s team and Michel Barnier, the EU Chief Negotiator, which removed the worst risk of a no deal exit. 2) The extension offered by the EU until 31st January 2020 has pushed the date backwards, and the temperature of the relationship improved.

Meanwhile sterling rose in relief and so did the FTSE 100. In fact the other key stock market index, the FTSE 250 representing smaller firms, rose by 6% over the past month. Despite being still below the median mark of 50, the PMI Index rose to 48.7, being helped by the Services sector and some re-stocking ahead of the (now deferred) Brexit date of Halloween. We correctly predicted this rise last month. It is unlikely to rise further during a month, since political uncertainty will deter even hardy optimists from investing.

Were there any falling factors?

Very much so. Although the UK economy grew again during Q3, by 0.3%, this is after a shrinkage during the prior Quarter. The performance of the UK over the last 12 months is a net growth in GDP of only 1.0%. Amidst signs of workforce shedding across most industries, the employment figure, so buoyant over past years, fell back slightly. The only bright spots, as far as this area of the economy is concerned, came from reports of hiring from service providers and a tightening of wages in the Services sector generally. The lack of political stability caused by the Election has weighed on the Index too, as one might expect. 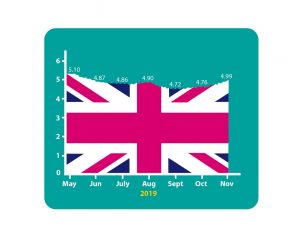 For economics junkies, the Index for economic factors only, rose 22 basis points from 5.56 last month, to 5.78. Surprising to many perhaps, but then again the longer-term signs remain extremely downbeat, and probably will until the Brexit uncertainty clears. It is heading back towards the all-time peak of 5.93 in April.

The next Brexometer measurement will be taken on Friday 13th December, immediately after the result of the General Election is known. It will then be released on Monday 16th December. The starting bell of the campaign has sounded, and already there are many conflicting signs and stories. Will it be a re-run of the EU Referendum, as some are forecasting? Or will be become a stramash of hundreds of topics, policies, assertions, angles and points, difficult to follow and impossible to call? Meanwhile, will the campaign affect the economy? How will the Index react? Keep following the Brexometer to find out.

For those who want to understand the impact of the two leading parties’ policies and manifestos, we will be issuing a special Brexometer assessment of the Labour and Conservative policies, at the end of November, on LinkedIn. It will summarise how each set of policies will influence the Brexometer score as at December 2020, in one year’s time, in a dispassionate and balanced way. A must read for all forecasters, planners and political junkies. If you’re not already, please follow me.

Footnote for nerds on Friday the thirteenth

Did you know that Friday 13th has only been seen as bad luck since the start of the 20th century? Today’s meaning can be traced back to the eponymous movie of 1933 where Big Ben started winding backwards on that fateful day. It was popularised more recently by Dan Brown in his novel the Da Vinci Code. If you share a fear of this date you are suffering from paraskevidetriaphobia. Now you know!