No spring in the step

The nation has a little nap to recover from Brexit stress

This month there was not much movement across both economic and political measures as the UK took a breather after the trials and tribulations of March and April. A welcome period of stability, you might say.

This month the Accountagility Index (AAX) moved up only ONE basis point to 5.10. Last month it was 5.09. The Index records UK political and economic health in a score out of ten. Any score below 5.00 is negative. Many factors did not change greatly over the past few weeks, and those that did, cancelled each other out. 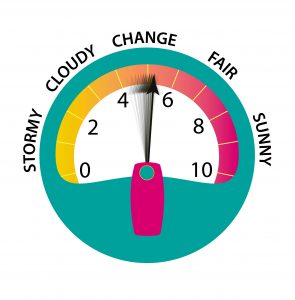 So what can be gleaned from this month’s data?

Since the movements were slight, let’s see what we can divine from these modest changes.

The economy is showing remarkable resilience. Employment continues to be at a generation high, but there are subtle indications of smaller tremors suggesting that the construction sector is trimming its workforce, as the new rate for the National Living Wage comes into force. Inflation is gradually coming down, and will continue to head south, so that’s a blessing for businesses. Markets have softened but it’s a drift rather than a drop. The Pound rose marginally over the period. Foreign investment is a curate’s egg, because official stats show elevated levels, but other data suggests a softening.

Politically, we are in a hiatus where the two political parties are supposed to be in talks around an agreed Brexit position, with the Customs Union option to the fore. It would be a highly unusual outcome if the two main parties, normally at each other’s throats, were to agree on something as strategic as a Brexit deal; but that is what they are presently engaged in negotiating. At least for now, there is no imminent threat of a no-deal Brexit and of course the exit date of the end of October seems a way off after all the short-term concerns of the recent weeks.

Business confidence is up this month, with all three economic sectors in the black. Picking out Construction, there is a fast rate of growth in house building, which has masked the downturn in commercial work and civil engineering activity. The fall is (unsurprisingly) down to Brexit uncertainty, with fewer tenders for major programmes being issued and decisions on new work being postponed. In the Manufacturing sector, as we predicted last month, confidence and activity has declined, as there is no need for stock-building ahead of a possible disorderly Brexit, at least for the time being. The biggest concern this month is early signs that supply chains are being re-routed, again due to Brexit concerns. It seems inevitable that the construction confidence will now experience a decline going forward. For those who enjoy the economic detail, the Index based purely on such factors is at 5.89, down from 5.93 last time, but still a mighty number.

A few other positive nuggets to enjoy. There has been a rebound in medium term optimism in both the Services and Manufacturing sectors, with new technologies, expansion plans and new product launches being cited as the grounds. Good news also emerged that shoppers were active in April, with a 2.5% increase in household spending being recorded. There was a 10% rise in spending at pubs and restaurants, showing that people still like to enjoy themselves. Perhaps they were just getting away from politics for a while! 44% of investors are more optimistic about the UK than the rest of Europe, in another survey, but is that more of a reflection on the stalled European economies? 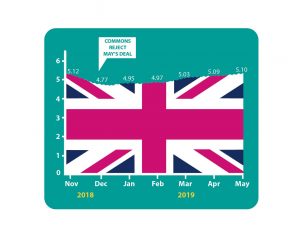 We are all having a rest from Brexit at the moment, but will it last? Will we be stable in May, or will May be back in her stable? Will the European elections, which have been confirmed as happening after all, create further turmoil? The new Brexit Party may have a few things to say over the next few weeks, and there is constant chatter about a change of leader. Will we see continuing resilience from the economy, or will ongoing uncertainly eat into the score? How will the Index react?

Last month we set up a competition open to everyone, to predict this month’s score. May’s winner is Jack Murray, who came closest with his prediction of 5.11. He has won the special prize, a Brexometer tenner with the serial number starting AA, one of the first new plastic ten pound notes ever printed. Next month would you like to join in? There is another Brexometer tenner to win, together with a framed certificate to show off your awesome punditry to your colleagues and friends. Just email your own prediction (a score out of ten to two decimal places), and this special keepsake could be yours… or you could just spend it!