May risk on June election may pay off

What a month we have had! The surprising announcement of a snap General Election by Theresa May has put the cat amongst the pigeons. Or rather, we now appear to be in the midst of a contest between a bloody difficult woman and a mutton-headed old wugwump, according to political commentary.

An equally big surprise is the resilience of the UK. The Accountagility Index (AAX) is flat this month, staying at 5.22, exactly the same as last month. Anything 5.00 is positive.

Despite the battering of the Index from the reduced political stability and heightened emotional temperature between UK and EU leaderships, the UK showed gains across other measures such as GDP growth, sterling index appreciation, markets and a surge in positive sentiment.

The Accountagility Index Rating for May 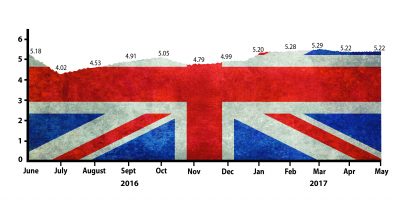 Who knows what further developments will be seen over the next month? Will the PM’s gamble work out? Our Brexometer reading could be swinging to and fro wildly as we head into the high emotions of the last few week of the election campaign. For those who enjoy following the Index, you will need to hang on a few extra days for the next instalment. The next reading will be taken on Friday 9th June, the day after the election, so that the result may be reflected in the score. Whatever happens, it will be worth waiting the extra days for!

Interestingly, we took a mid-month measurement of the Brexometer on April 19th, shortly after the General Election was called. The Accountagility Index (AAX) fell 11 basis points to 5.11, mainly due to the increased political instability caused. The fact that the Index has risen 11 basis points over the past fortnight is testament to the underlying strength of the UK economy, with gains from higher growth, reduced inflation, stronger markets and a marked improvement in sentiment.