The intense political negotiations have resulted in a victory for the Government but the clouds of Brexit uncertainty have tainted the score this month. The Brexometer reading is identical this month, with the Index stuck on May’s reading of 5.32.

The June score of the Accountagility Index (AAX) is a few basis points shy of the post-Brexit peak of 5.38. The Index records UK political and economic health in a score out of ten, and any score above 5.00 is positive.

Last month we asked if politics would stop the spring surge in the Index, and that is exactly what has happened. Although the Westminster gridlock between the two Houses is resolved for now, Theresa May had to rely on her Whips bringing in the sick and infirm into the Chamber for the vote. The majority was gained with a concession, which leaves her with severe challenges to negotiate with the EU and then drive the resulting agreement through Parliament.

Elsewhere economic factors are unchanged this month, except for a small fall in CPI inflation and a healthy reduction in the UK’s net debt. On inflation, the surge in the oil price will start to seep through into figures soon, and will arrest the decline in the inflation that was still coming through from the pound’s fall in 2016.

The Accountagility Index Rating for June 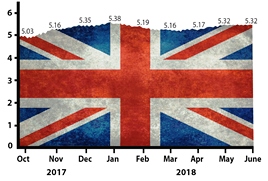 Astonishingly at such a flat moment, there were increases in the markets and sentiment. There was further improvement in the Service sector, but decision-making in the larger corporate clients is being held back by Brexit paralysis. There was no change on the Construction sector, with house-building propping up the numbers. Despite 22 straight months of expansion in the Manufacturing sector, a slower rate of growth is now clearly evident from significant falls in inventories and backlogs. Despite all of this, GDP is set to grow at 0.3-0.4% in Q2.

Next month, how will the Index react to the next round of Brexit negotiations? Has the Index peaked or is there more to come?