Recent events have shown that Theresa May has some fine joinery skills – first, she crafted a Brexit construction and secured it with more than just sticky tape, then repaired the whole cabinet when it looked like it was falling to pieces.

Now she must take steel with her to Brussels for the next round of Brexit negotiations, that start on 17th July. Away from all this carpentry, the real world is building its own construction, and it is starting to look quite interesting. Perhaps it quite likes the idea of a soft Brexit because the UK has actually climbed 11 basis points this months, with a score of 5.43. June’s score was 5.32

The July score of the Accountagility Index (AAX) is a post referendum record, beating the previous peak of 5.38 back in January and well ahead of the pre-Brexit benchmark of 5.18. The Index records UK political and economic health in a score out of ten, any score above 5.00 is positive.

This increase feels a little counter-intuitive, so what made up the rise? The big mover has been the sizeable increase in foreign inward investment, which has been rising strongly over the past twelve months, and lept up in June. Sentiment continues to improve, especially in services (where the strongest growth rate for nine months was observed) and Construction (driven by accelerated house building). June’s overall confidence score is 55.5 out of 100.

The Accountagility Index Rating for July 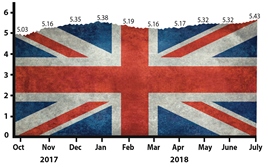 What does the softer Brexit proposal mean for the economy? Whilst there has been a heightened political uncertainty, the likelihood of retention of access to European markets will be seen by many in business as being wholly positive.

The other side of this coin is that international trade agreements may take a back seat in the government’s priorities, and their room for manoeuvre to strike them may be impacted. This month we have also noted that the potential for a disorderly exit from the EU has increased.

Keep Next month, Parliament is in recess but the next round of Brexit negotiations will be in full swing. How will the Index react? Can it continue to surge or will it all come crashing down to earth?