The UK emerged from its teens into a new decade this month, on a wave of optimism about the future. The removal of the political turmoil and the alleviation of Brexit uncertainty have added to the typical feel good factor at the start of a new year. Sentiment is up and there is a widespread view that Britain is at a turning point.

The Brexometer score this month has consolidated its dramatic gains from last month, with the Accountagility Index (AAX) rising just five basis points to 5.73, from 5.68 last time. This still represents an all-time high for the Index.

Some of the leading indicators are even more positive, with all three key sectors of the UK industry expecting 2020 to be a positive year for business. 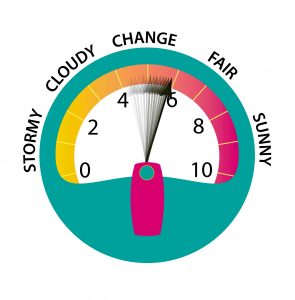 So caused the Index to go up this month?

Actually most factors were subdued last month, because the effect of the election in mid-month wasn’t fully reflected. The biggest impact was observed by the upward growth of inward investment, up almost 4% to a new high. There was a further gain for the FTSE 100 (offset by a small fall in the mid cap FTSE 250 index) and movement towards the EU exit date of 31st January 2020 also helped clarity.

What about the economy?

There were risers and fallers in the economic scene over the past month, but with the nation’s focus on the Election, these factors cancelled themselves out. In pure economic terms, the Index rose four basis points from 5.79 last month, to 5.83. Inflation rose a fraction, the Pound fell back a little, the debt ratio moved up a tick. Sentiment actually fell, but the story is incomplete since most of the data was compiled before the General Election on the 12th of last month. Services sentiment rose, but both Manufacturing and Construction are still in a deep downturn. The forward indicators are better though; even in the Manufacturing sector there is a net +33% expectation of growth in 2020. The jobs picture is fascinating, with London and the North being stronger, and the South seeing weakness. The government’s review of the IR35 legislation will be a factor in impacting jobs data this year.

Any predictions for the coming year?

Well yes there are a few… some easy ones first. The Conservatives’ large majority will create predictability, and allow them to pursue their agenda. It will also provide a better negotiating platform in the EU trade talks. Expect an ongoing argument about the deadline imposed by the UK Exit Bill of 31st December 2020, with the discussions going right down to the wire, and some items being shelved for a second round of negotiations in 2021. One of the keenest fought agenda items will be UK fishing access. Inward investment will continue to rise through 2020. Government investment will boost the Construction sector, and bring it up from the deep doldrums where it is sitting today. UK GDP growth will blip upwards during the year, but so will the debt ratio. Inflation will continue to fall in the first half, as the pound strengthens a little. The all-time high in employment will continue and the jobs market will tighten, putting pressure on inflation in the second half of the year. Politically, the calls from north of the border for Indyref2 will not go away. 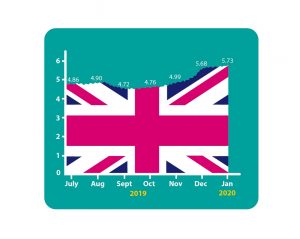 The next Brexometer measurement will be taken early in February 2020, when the UK will almost certainly be out of the UK and entering a new era. By then, will the lines of battle for the trade talks with the EU be drawn up? How will the global picture be affecting the UK, in terms of the Middle East, oil prices and the ongoing US-China trade standoff? Will there be any movement in decisions around UK infrastructure, including the key one on the future of HS2? How will the economy react? Keep following the Brexometer to find out.

There is a free competition open to everyone, to predict each month’s score. This month’s winner is our very own Jack Murray, who came closest to the actual reading with his prediction. Well done Jack! You have won the special prize, a super-rare Brexometer fiver with the serial number starting AA01, that commemorates the first month of the new decade. Next month would you like to join in? The Index will be measured again early next month, and we have yet another special Brexometer tenner to win, with the serial number AA, one of the first new plastic £10 notes to be issued. The winner will also receive a framed certificate to show off their awesome punditry to colleagues and friends. Just email your own prediction (a score out of ten to two decimal places), and this special keepsake could be yours… or you could just spend it!