The utter rout of Theresa May’s Brexit deal has been the big news of the moment. So you might expect the tumult and confusion in the Houses of Parliament to be driving the Accountagility Index (AAX) down this month. But the Brexometer is a blend of political and economic factors, giving a balanced measure of the UK’s health. And over the past month, seven economic factors have risen, pushing the Index up 18 basis points from December’s reading of 4.77 to the current level of 4.95.

The Accountagility Index (AAX) records UK political and economic health in a score out of ten. Any score below 5.00 is negative.

The very idea of good news at the current moment is shocking in itself. Whilst the political factors have been falling, the underlying economy remains resilient. If the Index was just based on economic factors alone, it would be standing at 5.61 today, well ahead of the pre-vote benchmark of 5.45

What caused the fall this month?

Although the impact of both the lack of leadership and the possibility of a no deal Brexit (now factored in at 70%) depressed the Index by ten basis points, there were seven reasons to be cheerful. A further drop in inflation, a sharp uptick in inward investment, and an increase in the FTSE 250 Index were the leading factors behind the economic improvement. But there were also modest increases in debt, growth and sterling. Lastly, sentiment increased in two of the three sectors, Services and Manufacturing. It is worth drilling down into the January sentiment picture. In Manufacturing, fear of a no deal Brexit was behind a sizeable increase in stockholding, but there were some good export wins seen, partly as a result of the weaker pound. Despite a small fall in sentiment, Construction experienced greater optimism due to expectations of some big ticket infrastructure programmes this year, mainly in transport and energy. The bright spots in Construction were civil engineering and residential building. Across all sectors, cost pressures are easing, which is better news for hard pressed businesses trying to restore profit margins.

Overall, this is a far better picture that you might imagine from the news. Looking forward, should we celebrate? 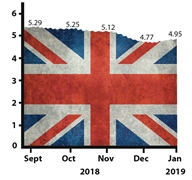 Last month we feared that the Index would continue to suffer whilst the political uncertainty prevailed. Since there is no short term light at the end of this particular tunnel, what will happen in February? Will Brexit fears bring the economic factors lower? Or will a possible deferment of the Brexit date beyond 29th March 2019 move sentiment, markets and investment upwards? What about the possibility of a General Election? What impact would that have on the Index? Perhaps our celebrations of this month’s good news should be muted.

Find out what happens next.

There has been so much interest in all things Brexit, and the Brexometer, that we had a competition amongst the Accountagility team this month. The closest prediction to the actual reading won a special Brexometer tenner. Congrats to Sarwat (our documentation Queen) who got within a mouse’s whisker with her guess of 4.95. Next month would you like to join in? I have an even more special prize, a Brexometer tenner with the serial number starting AA, one of the first new plastic ten pound notes ever printed. Just reply to this email with your own prediction (a score out of ten to two decimal places), and a special keepsake could be yours… or you could just spend it!