The UK left the EU on Friday 31st January 2020, with mixed emotions, and eleven months of colossal negotiations on a trade deal ahead. Business is also conflicted, with many concerns, but overall the reduction of political uncertainty has fostered a return to optimism.

As a result, the Brexometer score this month has further consolidated its recent gains, with the Accountagility Index (AAX) rising twelve basis points to 5.85, from 5.73 last time. This is an all-time high for the Index, which was created in June 2016. 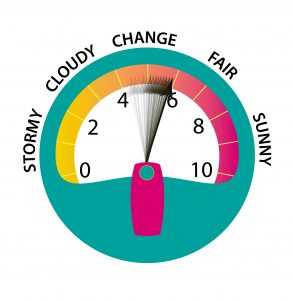 So what caused the Index to go up this month?

There were a few key factors making moves last month, and the most positive was business sentiment. The Services sector led with a large rise of 39 basis points, based on high confidence, new work flowing in and renewed investment. The Manufacturing sector shook off its downturn to record a neutral score and even the poor old Construction sector showed signs of recovery, especially in house-building. A couple of caveats before we get ahead of ourselves – the level of demand from Europe is understandably soft, given the Brexit situation, and the readings were taken before any impact of the Coronavirus had been assessed. Other changes in January included a small rise in growth and a gentle drop in inflation.

What were the other factors?

The key issue causing downward pressure on the Index was the sabre-rattling between the UK and EU politicians ahead of the forthcoming trade negotiations. Two very different visions for the deal have been set out, and at this stage there is no sign of compromise. Hence the likelihood of a deal being agreed in principle by the end of July is remote, and the discussions being extended into 2021 has become a real possibility. Meanwhile there was some easing off in the markets and in the value of the pound.

How is the economy looking?

Actually it’s looking rather splendid. In pure economic terms, the Index rose 24 basis points from 5.83 last month, to 6.07, an all-time high since the formation of the Index. There is even still room for improvement if sentiment and investment continue to improve. As the Government has given the green light to the massive HS2 project, will this bring a sustained and positive contribution to the Index?

Is it all over for the Brexometer too?

You may be thinking that the Brexometer no longer applies because the UK has left the EU now. But in reality we are in a transition period until (at least) the end of this year. So Brexometer fans need not fear, we will be bringing you the Index and the competition for the whole of 2020.

The next Brexometer measurement will be taken early in March 2020, when the initial impact of the Coronavirus on the global economy will be known, and the effect of HS2 will have been felt. We will also know a lot more about the EU trade negotiations. Will UK investment and confidence continue to rise? How will these other factors affect the Index? How will the economy react? Keep following the Brexometer to find out.

There is a free competition open to everyone, to predict each month’s score. This month’s winner is our very own Tanya Gardiner, who came within one basis point of the correct score with her prediction. Well done Tanya! You have won the special prize, a super-rare Brexometer tenner with the serial number starting AA. Next month would you like to join in? The Index will be measured again early next month, around 9th March, and we have yet another special Brexometer tenner to win, with the serial number AA20, to mark the 2020 year. The winner will also receive a framed certificate to show off their awesome punditry to colleagues and friends. Just email with your own prediction (a score out of ten to two decimal places), and this special keepsake could be yours… or you could just spend it!