Good news and bad news fought out a 5-5 draw

After the excitement of the past two months, when the Brexometer has been jumping up and down like a mouse on a trampoline, this month sees a more stable situation. The reading has risen by just two basis points from 4.95 in January, to 4.97, a small rise, but still below the parity level of 5.00.

The Accountagility Index (AAX) records UK political and economic health in a score out of ten. Any score below 5.00 is negative.

For good news junkies, if the Index was just based on economic factors alone, it would be standing at 5.68 today, up by seven basis points this month, well ahead of the pre-vote benchmark of 5.45, and at a very healthy level.

What caused the fall this month?

Five factors went up this month and five went down. On the upside, the biggest mover was the surge in the markets. With the FTSE 100 breaking back through the 7,000 barrier. Inflation is rapidly coming back under control, with the much-maligned RPI measure seeing 30 basis points carved off. Meanwhile, the aspect of the economy that is viewed by economists as the single most significant measure of health, employment, stands at a record high. So most of us are in work and what’s more, average earnings are rising. Let’s all be happy for that. 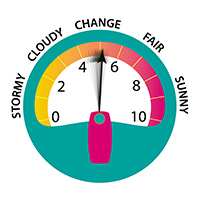 There were also five factors that fell however. The biggest one was sentiment, as all three UK sectors suffered from Brexit fear. The previously buoyant Services sector, for example, is now only just in the black at 50.1, the lowest reading since the Referendum. The worst segments are Transport and Communications, and Financial Intermediation. Manufacturing is the best sector, but even this has been dug to Brexit concerns; firms are building stocks in the event of a no-deal exit. In Construction, the mid-term expectation is still positive (a net 25% of firms expect a good year in 2019), but there has been a loss of momentum across the board. The watchword in all sectors is wait-and-see. 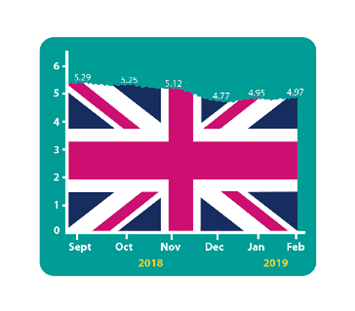 Last month we warned that the rise in last month’s Index should be celebrated cautiously. The tiny rise this month bears out that advice. Over the coming month, we will know what Parliament will do about the deal, including the so-called Malthouse Compromise, as votes have now been promised on the different options. It is however highly likely that the date of exit will be moved backwards in the next month.

So long as the current situation prevails, one thing is certain; the Index (AAX) will continue at similar levels to today until some certainty emerges. How will the talks between Theresa May and Jeremy Corbyn impact the score? Will a solution be found for the Irish Backstop? Will the EU and UK leaders have anything nice to say about each other? How will all of this affect the score?

Keep following the Brexometer to find out

There has been so much interest in all things Brexit, and the Brexometer, that we had a competition amongst the Accountagility team this month. The closest prediction to the actual reading won a special Brexometer tenner. Congrats to Sarwat (our documentation Queen) who got within a mouse’s whisker with her guess of 4.95. Next month would you like to join in? I have an even more special prize, a Brexometer tenner with the serial number starting AA, one of the first new plastic ten pound notes ever printed. Just reply to this email with your own prediction (a score out of ten to two decimal places), and a special keepsake could be yours… or you could just spend it!