One of the most dramatic movements in the Brexometer saw the Accountagility Index (AAX) rising 69 basis points to 5.68, from 4.99 last time, following the news of a sweeping Conservative victory in the UK General Election.

Whilst the economic score was more or less unchanged from November, the political news caused the Index to rise to a record high. This movement is the second largest recorded since the Brexometer measurements started in June 2016. 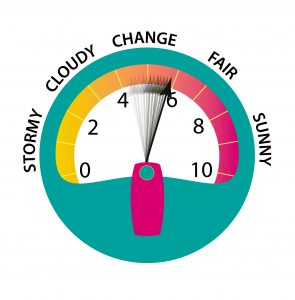 So, what caused the Index to go up this month?

The key influence was the removal of uncertainty in the UK political arena, with an 80 seat majority creating a level of stability not seen in recent times. Whilst there are new factors to consider for the future, such as the trade talks with the EU and the friction that will occur after the SNP’s successes, there is little doubt that the UK will exit the EU before 31st January 2020.

What about the economy?

There were risers and fallers in the economic scene over the past month, but with the nation’s focus on the Election, these factors cancelled themselves out. In pure economic terms, the Index rose one basis point only from 5.78 last month, to 5.79. Inflation fell, the Pound rose, the markets climbed a little over the month, but government debt rose slightly and sentiment fell, with activity in the important Services sector falling below the parity level of 50.0 (to 49.3). A similar fall was observable in the Manufacturing sector, whereas construction rallied albeit from a low base. Overall sentiment was still negative ahead of the result, with Brexit and electoral uncertainty the chief culprits. 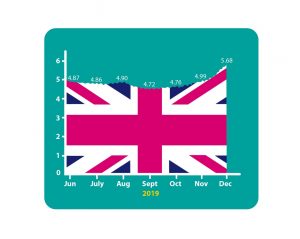 The next Brexometer measurement will be taken on Friday 10th January 2020, when we will all be in a New Year of a new decade. By then the impact of the Election will be better understood, as will the timetable for exiting the EU. Or will the UK have passed the legislation by then? What new announcements will Boris Johnson have made? How will the removal of uncertainty affect business confidence? What new developments will occur in the discussions of the trade talks with the EU? Will Nicola Sturgeon have made a move regarding indyref2? How will the economy react? Keep following the Brexometer to find out.

There is a free competition open to everyone, to predict each month’s score. This month’s winner is our very own Hyunsuk Yun, who came closest to the actual reading with his prediction. Well done Hyun! You have won the special prize, a Brexometer tenner with the serial number starting AA13, that commemorates the date of this reading, Friday 13th December 2019. Next month would you like to join in? The Index will be measured again on Friday 10th January 2020. Do you have 20-20 vision? Because of the challenge of getting your prediction correct in the next decade, we have yet another special Brexometer note to win. This time though, it’s a five pound note which has the serial number AA01, to mark the first month of the new decade. Another rare and prized note, that is the most sought-after prizes that we have offered. The winner will also receive a framed certificate to show off their awesome punditry to colleagues and friends. Just email your own prediction (a score out of ten to two decimal places), and this special keepsake could be yours… or you could just spend it!