The UK scene post-Brexit is undergoing another bump – but the good news this time is that it is UP, according to the Accountagility Index reading for December. The upward leap was caused by four positive factors.

The most significant one was the anticipation of the UK queue jumping from the back to the front of US trade talks, following the shock election result.

​The Brexometer is showing a rebound after November’s dip, and is now agonisingly close to parity at 4.99, up from 4.79 last month. A reading above 5.00 is positive.

There were four factors pushing the Brexometer reading upwards: 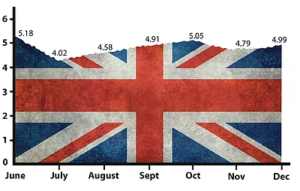 Meanwhile there is still confusion and concern about Brexit and a big debate around hard versus soft factors are keeping the Index just shy of a completely neutral reading of 5.00.

The ragged line of the graph shows how the Accountagility Index (AAX) has moved since the EU referendum in June, depicting the rocky landscape post Brexit. As anything above 5 is positive – we’re moving in the right direction – but the scene continues to be a rollercoaster.

David is a keen observer of anything Brexit, and has been since before the UK Referendum of June 2016. What in...
READ MORE