Phew! The UK has moved back into a positive Brexometer reading for the month of August with a score of 5.10 after a dip into the red in July. The Accountagility Index (AAX) records UK political and economic health in a score out of ten, and any score above 5.00 is positive.

The increase of 15 basis points will be a surprise to some, because we have seen a series of negative headlines and stories resulting from the Brexit negotiations, which has in turn reduced economic growth forecasts for this year, and chipped away at business confidence levels. It is also undeniable that the Pound is still at a depressed level, languishing at its lowest ebb since last November. These aspects are reflected in the Accountagility Index, but this month they have been counteracted by positive signs that have not been focussed on in the news.

Inward investment jumped significantly, showing the long term attractiveness of the UK. Much of this is coming from our good old transatlantic friends, and the scale of the trade opportunity emerging with North America is encouraging.

The drop in both CPI and RPI shows (as predicted here earlier this year) that we are now past the peak of the inflation cycle created by Brexit and the drop in sterling. Markets continue to storm ahead. Unemployment has been steadily decreasing month on month, to 4.5% this time.

On top of that, the Queen’s speech was passed and the extreme political instability in the wake of the election has passed into a “new normal” level of uncertainty. The UK has taken a deep breath and is calming down. An example of this is the manufacturing sector that saw a high in confidence this month, with new orders getting a boost from exports.

The Accountagility Index Rating for August 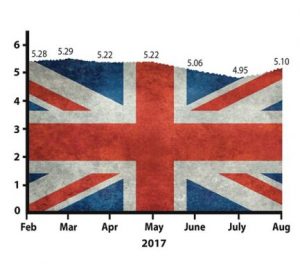 Things have improved then. But what is to come?

Parliament is in recess and the silly season is upon us. So August will see plenty of funny headlines but no political turmoil. The inflation cycle is back on the way down, and this can be safely predicted to fall over the next six months. On the other hand, Brexit fears will persist and could have further impacts of confidence and growth. If the base rate ticks up later this year, it will feed into sterling and may move the pound up. A number of factors are in play.

What will happen in August? Can the AA Index stay in the black? Keep following the Brexometer to find out.