The UK stood still for a second successive month in April, as the snow and ice of March reduced economic activity and depressed business confidence.

The April reading of the Accountagility Index (AAX) saw a minuscule rise of one basis point to 5.17, from 5.16 in March. The Index records UK political and economic health in a score out of ten, and any score above 5.00 is positive.

The key mover and shaker in March was the dramatic reduction in sentiment in the Services and Construction sectors. According to commentators in the important Service industry, the UK simply iced up. The slowdown in business activity was the sharpest for 18 months. In Construction, civil engineering work declined at the fastest pace for five years. This negative movement was offset by the fall in inflation, which is finally dropping out of the system.

The Accountagility Index Rating for April 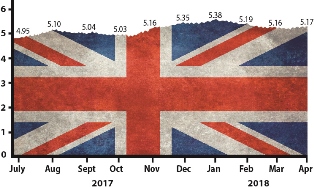 This month we are focussing on the good news around employment, which improved this month again, following steady falls since the Brexit vote. At only 4.3%, it represents the lowest unemployment rate since 1975, two generations ago. The economy is heading towards effective full employment and compares favourably with the EU whose average rate is 7.3%. It is not very far from Germany’s healthy 3.6%. Imagine life in other EU countries, though, where unemployment is having an impact on social cohesion; 6.1% at our neighbours Ireland, 9% in France, 11.1% in Italy and a crushing 20.9% in Greece. Let us bask in this performance – if only for this month. However, whatever view you may have of Brexit, there is evidence of a demand for more workers from outside Britain over the coming years, based on this trend.

Despite the sentiment worries, there are silver linings to provide warmth. The Manufacturing sector held steady last month, and even in Construction, future expectations and job creation are increasing. So there are some reasons to be cheerful.

Next month, will a delayed spring finally burst forth, seeding an economic bloom? Will there be no more icing on the pavement, but more icing on our cake?