Gathering inflation and Scottish threat to the Union stop the run…

After last month’s small increase, the positive run in the Accountagility Index (AAX) that started last November, has come to a shuddering halt. The Brexometer reading for April stands at 5.22, down from last month’s 5.29 level.

Whilst the overall picture was encouraging with employment, markets, business confidence and foreign investment all rising, there was a significant rise in inflation (CPI was up 60 basis points to 3.2% and RPI up by half a percentage point to 2.3%)

The additional complexity of the political scene, and the reduction in political stability as a result of the request for another Scottish independence referendum also pushed the Index down, as did the drop off in economic growth, to just below 2%.

The Accountagility Index Rating for April 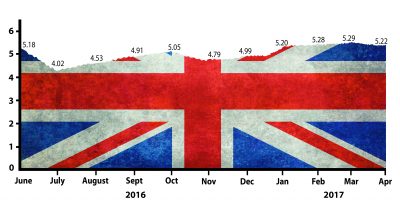 The general picture is very mixed, with some positive signals easing, but analysts are predicting a stronger pound over the coming months. Will this also cause inflation to subside? The Brexit gun has been fired, but there is no let-up in the uncertainty about the negotiations. So the forces of bull and bear continue to compete…

As predicted, March was certainly an action-packed month, with many developments. Nevertheless, the Brexometer continues in positive territory. Any figure above 5.00 is positive.

What will April and the coming months bring? Can the UK spring back again, now that the winter is behind us? Keep following the Accountagility Index to see whether the economic climate will also improve during Q2.